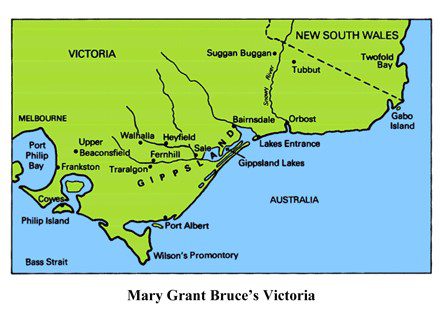 Yet another war brought the Bruces back to Australia.

But only after a devastating tragedy.  A terrible shooting accident in 1929 at Drumcrinna took Pat’s life at the very young age of 12.

Jon was still at school, at Repton in England.  The Bruces then moved to Bexhill in southern England until the end of 1938, when the gathering war clouds persuaded them to return to Australia.

They sailed on the Dominion Monarch‘s maiden voyage.  Promoters talked it up as being the largest, fastest, most splendid passenger ship in the world.  It displaced 25,500 tonnes, and was one of the first ships to use gyroscopic stabilization.  In fact, Mary later wrote that it “it rolled magnificently”.

The Bruces entered Port Phillip Bay on 13th January 1939.  Best known as Black Friday, that was when much of Victoria had major bushfires.  The smoke and ash from them was sufficient to blanket New Zealand for the following fortnight.  As by then she was a very well established author with an international reputation, Mary’s arrival was the talk of the town, and she was much celebrated an honoured with a civic reception.  “The most beloved of all Australian writers, no matter what their field,” wrote the Melbourne Herald.  Many other newspapers around Australia sang similar praises.

In June 1939, Mary Grant Bruce told an interviewer “Oh, and do put this in your article. All my characters are fictitious.  I never put real people in my books and, to tell you the truth, I’m rather growing tired of reading that so-and-so was the original Norah.  There is a good deal of my own father in David Linton, the father in the Billabongs, and quite a lot of my little Pat in The Houses of the Eagle.  Otherwise all of my characters are quite ordinary.”